Showing posts with the label Nagato
Show all

Putin’s Visit to Japan – Not So Friendly “Friendly” Judo Sparring 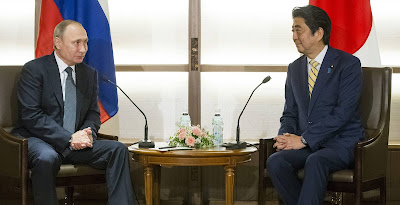 The mid-December two-day visit of the Russian president, Vladimir Putin, to Japan raised high expectations among many about the prospect of signing a peace treaty that is now 60 years overdue. Among other things, there was also high anticipation for the return of at least two of the four islands that Japan calls Northern Territories, and Russia calls the Kuril Islands, which Japanese consider “stolen” by Stalin at the very end of the WWII. The Japanese prime minister Shinzo Abe, went out of his way to make this visit “special” for his Russian guest, by arranging the first day to be spent in his hometown, Nagato, in the southern prefecture Yamaguchi of the main island Honshu – place, famous for its exquisite sake, hot springs and delicious food. The carefully planned schedule, with a pronounced demonstration of a personal hospitality touch by prime minister Abe, listed “relaxing” time in famous hot springs, and a feast with exotic traditional local food, including exquisite d
Post a Comment
Reactions:
Read more
More posts