By Kujira
Politeia, in Greek (πολιτεία), is usually understood to mean constitution, a regime of some kind, or simply a form of governance. But the word is loaded with much broader and sophisticated meaning. Isocrates, one of the greatest Greek rhetoricians, considered politeia to be the soul (ψυχή) of the polis. For him politeia represented not only the specific form of institutional and administrative distribution of power and state structures, but also more broadly the political culture and ethos - values, goals, and education - in one. His understanding of politeia is largely considered to have laid down the foundation of relationship between ethics and politics. Isocrates argued that those in power are not simply members of the politeia, but the architects of its character, yet he also believed that they are a byproduct of it.

Politeia, of course is the original title of the seminal Plato's dialogue, known to us by its Latin translation as Res Publica - the public affairs, or simply The Republic. Despite the incessant criticism over the centuries of its utopian and even totalitarian character, Plato's Republic is among the most sophisticated and complex works of Ancient Greece. Being not just a political observer and philosopher, Plato spent a great deal in his seminal dialogue discussing ethics, epistemology, and metaphysics. The political theme in the Republic is hardly the only, or at times even the main one. The notion of politeia is very obscured in the dialogue, where the ideal polis is built on the consent of the people to be kept in dark and away from the vital decision-making for their own sake. Plato's Republic imagines the rulers' exercise of power for the good, and with the consent of the governed, and it outlines specific institutional arrangements to achieve that good, but does not want the people in the politics.

This is democracy upside down. Hence the subtitle of this website. Sometimes it takes the effort to stand on our heads and look at the world around us to see it in its full frankness. And sometimes, it is necessary to look at the word with our heads upside down so that when we resume our regular standings, to focus better on the important things, and leave aside the distractions.

So, after looking at Plato's upside down concept of perfect politeia we can go back again on our feet and delve into the depth of the concept from a different perspective, and the one that is most associated with Aristotle - Plato's most famous disciple. One can never understand Aristotle's complexity unless he has a full grasp of the multifacet meanin politeia had for him. Ultimately, Aristotle differentiated between 'necessary' and deeply 'political' atributes of the polis. The polis - that is the coherent social unit that is not simply populated place by individuals, but has a soul of its own - has a variety of elements: citizens (males), alien residents, women, children, slaves. However, only the citizens had the power to discuss and decide social and political matters that are of great importance for the governance of the entire polis. Citizens, for Aristotle, were the shareholders of the politeia, which was then emanated into a virtual constitution - a template, model, and actual form of the way of life in the polis. That is how politeia slowly returned to the meaning of a soul of the polis, but this time loaded up and enriched by the journey through the discussions of some of the greatest minds of all time.

I find all this extremely fascinated, that is why the general concept of this website is based around the notion of politeia. Of course, I am hardly the first one to think of this name, so when the domain with the proper English transcription was not available with any of the popular extensions, I decided on Politea.org

Simply put, this is where I intend to publish some of the myriad discussions passing through my head every single day. I certainly hope people to read it, but deep down, I do it as a therapy. The inner 'me' wants to come out and say "hey, cogito ergo sum!" The other 'me' however can never find the necessary confidence in the merits of all these ideas to be offered for anything else but 'food for the soul' on a-la-cart base from my own website. This, I am told, is either (the bad news) a signÂ  for rationalization of profound self-blinding insecurity and inability to handle rejection of my own mediocrity somewhere else, or (the good news) an expression of deep intellectual indecisiveness based on spiritual doubt and scientific complexity. I certainly hope for the latter, but I tend to settle for the former.

In any case, if someone finds it interesting, boring, thought provocing, or trivial and lame, drop a comment, make a noise, say something. Better something than nothing.

P.S. Oh, in case you have not noticed, I am rather prolific in writing, so I think that it would be a miracle if someone had actually read the About announcement in its entirety. I certainly wouldn't. But then again, I chose to write this so that I don't have to read it :) 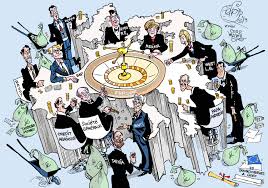