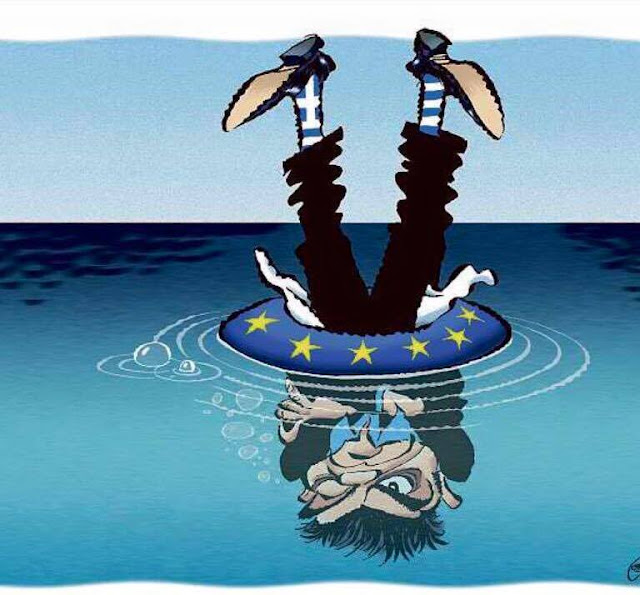 In the analysis of the current Greek row with the country’s creditors, and of its inimical relationship with the EU as a whole, one must differentiate between the process and the action, if it were not to “throw the baby out with the bathwater.” The negotiations with the government of the populist Syriza party, in conformity with the expectations since the beginning of the year, when the party won landslide snap elections on a wildly populist anti-austerity, anti-IMF, anti-immigration, and largely anti-EU platform, have now reached, not surprisingly, a dead end. For the past few months the negotiations have followed the example of a textbook strategy: a form of chicken game, where the winning strategy seems to rests on the use of credible threat in order to convince your opponent in the presumed rationality to choose the lesser of
two evils. And on assigning roles: for EU that would be Jean-Claude Junker as the “good cop,” and the German finance minister Wolfgang Schäuble and the IMF Managing Director Christine Lagarde as the “bad cops,” and for Greece the finance minister Yanis Varoufakis being the “bad cop,” with the prime minister Alexis Tsipras struggling to fit the role of the “good cop,” often unconvincingly. The bailout G-referendum is just the latest of a long list of “tactic tricks” in the textbook. With both parties calling each other’s bluffs, however, it becomes gradually clearer that Greece and the EU are heading for an even more destructive collision – head on.  Grexit is coming, but not yet.
This commentary is now published on EuInside.eu. Please, visit their website here to read it in full http://www.EUInside.eu
Reactions: